I have decided to make a promotional advertisement for the company ‘Film 4’ to promote one of there movie nights. Film 4 is a digital TV program broadcast in the United Kingdom and Republic Of Ireland, owned by ‘Channel 4’. Alongside ‘Film 4’ the channel also operates another channel, ‘Film 4 +1’ on satellite, cable and free view. Film 4 also has an on demand service, ‘Film4 on demand’.

Film 4 was first known as ‘FilmFour’. Film4 was ‘Channel 4’ second channel when they first launched on the 1st November 1998. At first it was a subscription only service on Sky. Film4 on July 23rd became a free to use channel and viewers increased from 300 thousand to around 18 million households.

In the video above there are multiple idents being shown. Film4 use two different styles of ident, either the cinematic approach or the motion graphic style. Below there are more of the motion graphic idents film4 have been using alongside there new range of idents made from ManvsMachine.

Film4 has launched an update to their on-air brand identity with 16 new idents created by ManvsMachine. The idents feature movie references from various movies and directors.

These idents were shot in five different locations in the US and UK including Brighton’s Grand Hotel and a gas station in California. Man vsMachine said this when interviewed about there new idents for Film4.

“We wanted to avoid genres, such as horror or sci-fi, as they can feel a bit clichéd, and create a set of moods instead,” explains ManvsMachine creative director Mike Alderson.

“Locations are deliberately ambiguous and each film starts off ambiguously, before being taken in a different direction. There’s a sense of wonderment in the children riding bikes, while the tyre is a bit more aggressive, and the police car suggests something darker and more ominous,” he adds. “In the woods, the light provides a nod to Moonrise Kingdom, but avoids anything overtly ‘sci-fi’.”

To create the moving strip effect, ManvsMachine built a custom in camera devise which ‘stacks’ live action scenes. The camera had to be passed through the floor and ceiling of sets during filming, they even dug holes in the ground on some of the exterior locations.

“It was trickier than it looks to do,” explains Alderson. “The camera has to start the same height above and below the space, so we had to build elevated sets and dig a huge hole in the woods [in California]. We even had an archaeologist with us making sure we didn’t dig up any Native American remains,” he adds. 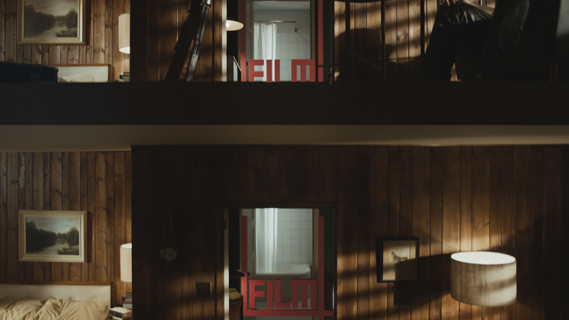 Each ident has different references to various films. Scenes shot in a pink corridor lead to an obvious Stanley Kubrick’s film, The Shining. Also Wes Anderson’s, ‘The Grand Budapest Hotel, even referencing films such as Poltergeist and Gravity. One ident, shot in the motel room, references 42 films.

“We wanted to create something film buffs would enjoy watching, but we also wanted the idents to appeal to anyone – I hope even people who don’t spot the references will like them,” adds Alderson.

“Our core mantra, throughout the whole project, was that it needed to be a film channel, not a TV channel. We felt it was really important to keep red and black as the only two colours, and that every title should be given the same prominence, whether it’s a high end production or something more lowbrow or low budget,” adds Alderson.

Come up with a catchy, snappy tagline. Keep it short and sweet; the average product needs no more than six or seven words. If you say it out loud and it sounds like a mouthful, edit it down. Whatever it is, it should grab the consumer’s attention and convince him or her that your product is different from everyone else’s. Consider using:

Use a persuasive technique. There are tried and true methods that advertisers rely on to make their ads stick. These include:

2008 – In 2008 The Big Deal broadcast live interactive quiz shows 7 days a week very late at night until early in the morning. They would broadcast various games and puzzles, which then people could enter in to win some money.

November 6th 2009 – The Big Deal decided to broadcast their own content. Teleshopping which was broadcast between 04:00-06:00.

December 6th 2012 – The Big Deal was renamed Movie Mix, this channel had a 24-hour broadcast slot. The channel is owned by Square 1 Management but is a sublet to Sony Pictures Television.

Movies4Men is a free to air servise on Freeview, Freesat and Sky. The channel target audience is of course men but middle to old aged male viewers. The channel usually shows classics in cinema history, focusing on western film and war films.

From this alone it quite clear that this channel is going to be on another scale to Film4.

In the table below we can clearly see that Film4 is one of the largest film channels in the UK. Even ‘Sky Movies Premiere’ ratings where not beating Film4.